Wednesday was the scans and everything went well I peed through the eye of a needle that night because of the contrast lol but it was worth it. I must admit I did have a chuckle or two once the scans were over looking back. Because we had the imagining people playing out “air junga” as they had to think ahead on how to get the scans done as I was stuck on my side lol.

Thursday came and I was nervous about the meeting but in came Dr Donnellan again; he was so calm and even tho the Doctors where in my room with me and mum, I still felt calm and safe. As Dr Donnellan started talking about the outcome of my scans I saw his face it was a look of disbelief. . . he began to speak, he said “Mollie your scans are the worse I have ever seen.” this coming from a world renowned doctor. One who has seen sooo many patients from France to Europe to America to Australia and who know where else.. said “these are the worse he’d seen” that is a mammoth statement and the BIGGEST validation for mum and I and we just cried. I could only say Thank-you for recognising this as I really do feel like my spine is snapping into my stomach” I looked at the Townsville doctor and continued “which I know is impossible,” then looking at doctor Donnellan “ but it is how it feels and I cannot stand straight. Then add in my coccyx and when I go to open my bowels I come out of the toilet crying, sweating, shaking and unable to breathe”. Dr Donnellan lent forward and said “But from your scans Mollie I can understand why you say this and we can fix this”. Well on came the tears again. Validation is the greatest gift you can give someone when everything has been stripped away from them. . and I mean everything, love, dignity, self love, self independence, freedom, even the right to feel any emotion. As any emotion I feel my CRPS gives me what is called a “pain price” but more on this later.

I listened to Dr Donnellan as he explained what he was thinking , I’m not sure if I butted in saying “yes I agree, because at 24 years old a spinal infusion does not leave me with a good quality of life.” then looking at Dr Donnellan I asked “what are you thinking would be better?” He asked me the same question and I said “Well I’ve had to do my own research on what kind of other surgical operations there are for me. As I know in my gut “intuition” that an infusion will, not would but, will spread my CRPS into my spine.” and continued with “I’m thinking if you could perform maybe a interspinous spacer device so my vertebrae can lift apart and suck in my disc fluid”. Dr Donnellan looked at me and said “No that’s not possible as disc fluid doesn’t move like that. Once out of it’s sack it cannot be put back in.” He continued “But what I can offer that gives you the best long term outcome, is a new device called a Barberatic device which acts as a plug and holds in any remaining disc fluid.” I was so happy that I cried . . . again lol. The main issue with CRPS in your spine, is that, once there it can and will spread to your bodies organs. Now most doctors don’t know this but I’ve heard and met too many CRPS’ers online who have had that very thing happen. And suffer greatly from going blind from pain in the eyes, to not being able to eat.

Once the meeting was over, later that afternoon the doctors in training came by and got my to sign my surgical form. I was soo happy and so ready. So tomorrow Friday July 8th, I’ll be operated on and depending on how long I’m out for I may awake July 9th (my Birthday) to a new way of life. I just was so happy. The morning of operation it went like a dream until I was about to head off to theatre. A nurse had informed me that Dr Donnellan may not be the one operating and I just went into shock. So I arrived in the theatre bay waiting to find out if Dr Donnellan was here. I arrive to the pre operative ward where I am in this U shaped bed area. I was the furtherest bed leaning against the left hand side of the wall. And as I look over to my left there is this mammoth painted art piece . It was the African jungle in the rainforest and here in the centre was these two pythons sitting either side. The Right one was in attack mode and quiet angry, However the left one was calm, chilled and happy.

I mention this as not 4 weeks before today I had a dream with Dr Donnellan and I, are in this medical/rainforest area. And as I got closer to him these two snakes appeared the right was angry and nasty and threatened my operation with Dr Donnellan. But the left was the path of success, peace and harmony. I never truly got what that was about until this moment.

Right now laying in this bed waiting to see if Dr Donnellan was here. I was wheeled out into the corridor and here is the left and right turn. We went left and into this room where Dr Donnellan was standing and all I could say was “I’m so happy to see you, I was told you may of not been here”. Tearfully. He replied “no no, this is definitely happening I’m here. Everything is ok” again he explained what was going to happen next. I was injected and the next time I opened my eyes my L4 disc was fixed. Unfortunately the coccyx wasn’t able to be removed as I was under too long.

Dr Donnellan stated there was a lot of scar tissue and that it had worked it’s way into a U shape pressing on my bowel wall. This explained why I couldn’t apply pressure to my bum any more. Dr Donnellan said that the coccyx was broken back 5 times into place and he hoped, it would hold. However there was over 50% chance that it wouldn’t hold because of how many times he had to break it to get it to stay in position. That night July 8th I woke up and unfortunately a few hours after theatre I was in the worse CRPS pain flare I had been in for a while. I was violently thrashing for 4 hours!. Mum and I were petrified that this thrashing straight after major spinal surgery would have moved my device so we thankfully had an X-ray and it held! We were over joyed and happy that the device held but a lot of this had to do with it being done by Dr Donnellan.

Mum got some video's of my first steps (as you can tell she is my biggest fan):

I spent 2 weeks in Townsville where I was discharged home. When we got home I had the best! 5-ish weeks in the longest time! Just like I dreamed my legs and bum were fixed and I was so happy and I spent those 8 weeks in total well. Sadly though this was too little too short and I started to notice at week 5/6. that my coccyx pain was breaking back and it just crushed me and my family. Quickly we noticed sitting standing and walking became harder and I began displaying signs again of my struggles. Sweating if I sat more than 5 minutes like I just stepped out of a shower, the dark eyes came back. It begun taking longer to go to the toilet and of course bleeding.

After a week of rest, physio and support I was able to walk! actually on my feet and wander along!

But you know what those 8weeks in total were the best 8 weeks I’d lived! I was young! I was happy! I was FREE! And none can take that away from me, not even the pain. I still can close my eyes and hear the birds chirping, as I sat in the sun reading my books. Feeling the gentle breeze dancing through my hair. I still remember what it was like moving without struggle and getting to do physio movements without great pain. To finally stand straight I swear I grew 5 cm taller. It was bliss.

So hopefully this time around its for good. And I can say that I had full and complete treatment. All thanks to one Doctor, man and human being who cared enough to help me be free. Many blessings Mollie

Check back soon
Once posts are published, you’ll see them here. 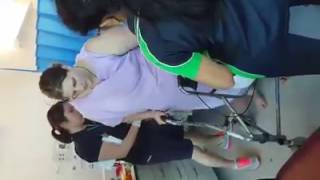